Abstract: Artistically controlling fluids has always been a challenging task. Optimization techniques rely on approximating simulation states towards target velocity or density field configurations, which are often handcrafted by artists to indirectly control smoke dynamics. Patch synthesis techniques transfer image textures or simulation features to a target flow field. However, these are either limited to adding structural patterns or augmenting coarse flows with turbulent structures, and hence cannot capture the full spectrum of different styles and semantically complex structures. In this paper, we propose the first Transport-based Neural Style Transfer (TNST) algorithm for volumetric smoke data. Our method is able to transfer features from natural images to smoke simulations, enabling general content-aware manipulations ranging from simple patterns to intricate motifs. The proposed algorithm is physically inspired, since it computes the density transport from a source input smoke to a desired target configuration. Our transport-based approach allows direct control over the divergence of the stylization velocity field by optimizing incompressible and irrotational potentials that transport smoke towards stylization. Temporal consistency is ensured by transporting and aligning subsequent stylized velocities, and 3D reconstructions are computed by seamlessly merging stylizations from different camera viewpoints. 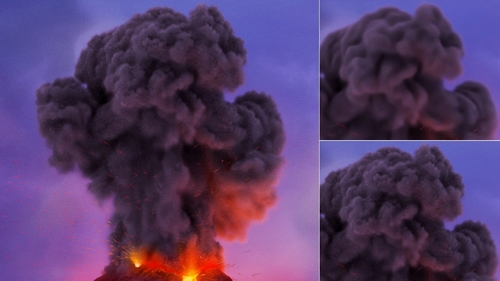 Abstract: We present a novel technique to correct errors introduced by the discretization of a fluid body when animating it with smoothed particle hydrodynamics (SPH). Our approach is based on the Shepard correction, which reduces the interpolation errors from irregularly-spaced data. With Shepard correction, the smoothing kernel function is normalized using the weighted sum of the kernel function in the neighborhood. To compute the correction factor, densities of neighboring particles are needed, which themselves are computed with the uncorrected kernel. This results in an inconsistent formulation and an error-prone correction of the kernel. As a consequence, the density computation may be inaccurate, thus the pressure forces are erroneous and may cause instabilities in the simulation process. We present a consistent formulation by using the corrected densities to compute the exact kernel correction factor and, thereby, increase the accuracy of the simulation. Employing our method, a smooth density distribution is achieved, i.e., the noise in the density field is reduced by orders of magnitude (see Figure 1, left and center). Besides that, we decrease the overall volume loss of the simulated fluid. To show that our method is independent of the SPH-Variant, we evaluate our method on weakly compressible SPH and on divergence-free SPH. Incorporating the corrected density into the correction process, the problem cannot be stated explicitly anymore. We propose an efficient and easy to implement algorithm to solve the implicit problem by applying the power method. Additionally, we demonstrate how our model can be used to improve the density distribution on rigid bodies when using a well-known rigid-fluid coupling approach. 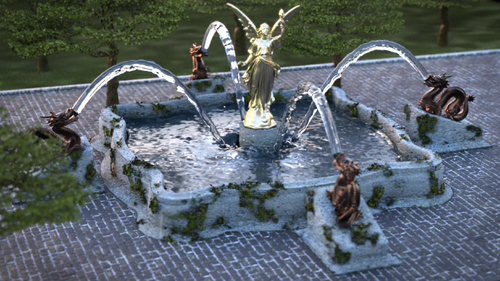 A Multi-Scale Model for Coupling Strands with Shear-Dependent Liquid

Abstract: We propose a framework for simulating the complex dynamics of strands interacting with compressible, shear-dependent liquids, such as oil paint, mud, cream, melted chocolate, and pasta sauce. Our framework contains three main components: the strands modeled as discrete rods, the bulk liquid represented as a continuum (material point method), and a reduced-dimensional flow of liquid on the surface of the strands with detailed elastoviscoplastic behavior. These three components are tightly coupled together. To enable discrete strands interacting with continuum-based liquid, we develop models that account for the volume change of the liquid as it passes through strands and the momentum exchange between the strands and the liquid. We also develop an extended constraint-based collision handling method that supports cohesion between strands. Furthermore, we present a principled method to preserve the total momentum of a strand and its surface flow, as well as an analytic plastic flow approach for Herschel-Bulkley fluid that enables stable semi-implicit integration at larger time steps. We explore a series of challenging scenarios, involving splashing, shaking, and agitating the liquid which causes the strands to stick together and become entangled. 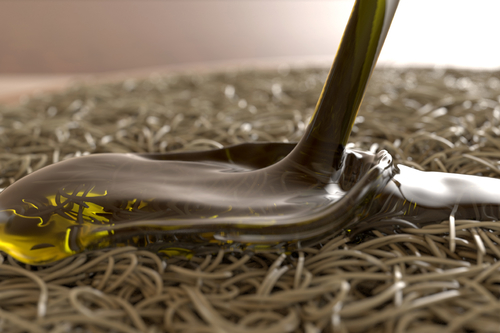 Abstract: We introduce the Reduced Immersed Method (RIM) for the real-time simulation of two-way coupled incompressible fluids and elastic solids and the interaction of multiple deformables with (self-)collisions. Our framework is based on a novel discretization of the immersed boundary equations of motion, in which fluid and deformables are modeled as a single incompressible medium, and their interaction is modeled through a unified system on a fixed domain, where Eulerian and Lagrangian terms are combined. One advantage for real-time simulations resulting from this modeling is that two-way coupling phenomena can be faithfully simulated while avoiding costly calculations such as tracking the deforming fluid-solid interfaces and the associated fluid boundary conditions. Our discretization enables the combination of a PIC/FLIP variant with a reduced-order Lagrangian elasticity formulation. Crucial for the performance of RIM is the efficient transfer of information between the elasticity and the fluid solver and the synchronization of the Lagrangian and Eulerian settings. We introduce the concept of twin subspaces that enables an efficient reduced-order modeling of the transfer. Our experiments demonstrate that RIM handles complex meshes and highly resolved fluids for large time steps in high framerates on off-the-shelf hardware, even in the presence of high velocities and rapid user interaction. Furthermore, it extends reduced-order finite elements elasticity solvers such as Hyper-Reduced Projective Dynamics with natural collision handling. 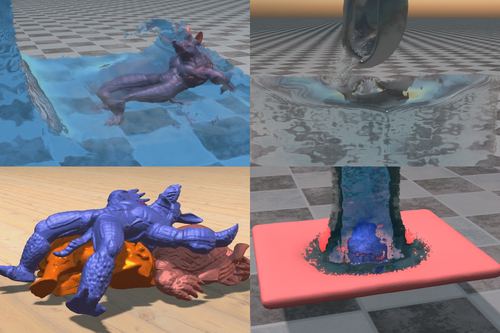 A Thermomechanical Material Point Method for Baking and Cooking

Abstract: We present a Material Point Method for visual simulation of baking breads, cookies, pancakes and similar materials that consist of dough or batter mixtures of mainly water, flour, eggs, fat, sugar and leavening agents. We develop a novel thermomechanical model using mixture theory to resolve interactions between individual water, gas and dough species. Heat transfer with thermal expansion is used to model thermal variations in material properties. Water based mass transfer is resolved through the porous mixture, gas represents carbon dioxide produced by leavening agents in the baking process and dough is modeled as a viscoelastoplastic solid to represent its varied and complex rheological properties. Water content in the mixture reduces during the baking process according to Fick's Law which contributes to drying and cracking of crust at the material boundary. Carbon dioxide gas produces by leavening agents during baking creates internal pressure that causes rising. The viscoelastoplastic model for the dough is temperature dependent and is used to model melting and solidification. We discretize the governing equations using a novel Material Point Method designed to track the solid phase of the mixture. 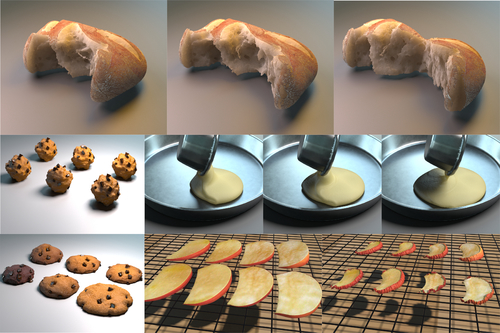