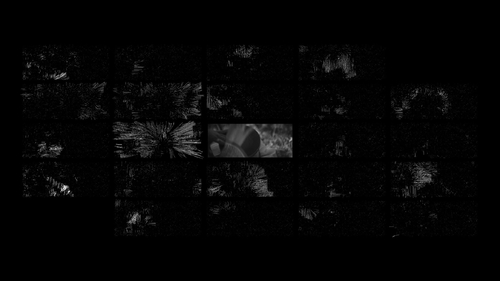 Algorithmic Analysis and Visualization of Motion in Cinema

Artists Statement: This talk explores some of the possible applications of unsupervised machine learning methods in found footage cinema, a tradition of experimental art that re-edits excerpts from existing films. This artistic practice sometimes aims to reconfigure our experience of the moving image heritage. In this context, machine learning algorithms has the potential to capture aspects of the cinematic experience for which we lack critical concepts, and which are for this reason difficult to describe. One important example concerns cinematic motion. Established critical discourse often speaks of motion in film by reference to the movement of objects or the camera. Film scholars might describe a scene by noting, for instance, that a person is walking fast or that the camera is tilting upwards. What is missing in this kind of description is the visual texture of cinematic movement. The two-channel algorithmic installation Errant: The Kinetic Propensity of Images applies matrix factorization techniques to the analysis of optical flow in cinema, focusing on the work of Chinese director King Hu. This method produces a visual dictionary of basic motion patterns the represent what could be described as the "kinetic overtones" of image sequences. The results are then visualized using streaklines, a technique from fluid dynamics. This presentation will discuss the motivation and methodology used in the production of this work, in relation to other work by the speaker. Implications for cinema theory will also be briefly discussed. 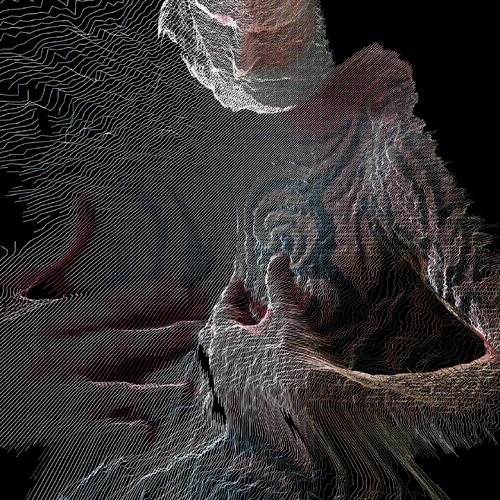 Artists Statement: Anathema is the psychological study of Doug's demons, nightmares and fantasies in a dream-like autoscopy that displays the strengths and vulnerabilities of a self-altered and self-made man in his 70's. The piece was created with the Kinect volumetric sensor, with music by Mexican cyber-punk musician Cesar Cardenas aka Zoonosis. 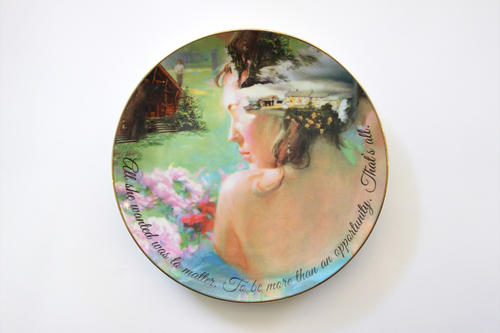 Captured by an Algorithm

Artists Statement: Captured by an Algorithm is a commemorative plate series that looks at romance novels through the lens of the Amazon Kindle Popular Highlight algorithm. Each plate features one highlight and an algorithmically generated landscape. The highlights tell a story of the loneliness, grief, vulnerability, and discontent felt by the readers. 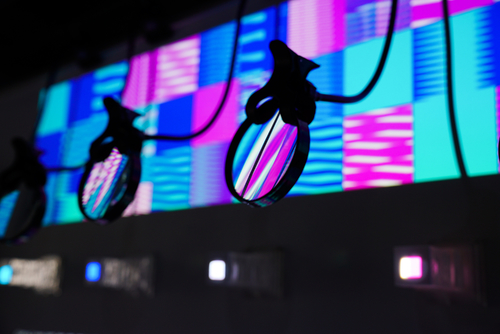 Artists Statement: The personality of living things is beautiful. Is it possible to have a personality in the digital world? CharActor is a video work that produces animation by recognizing shader programs as genes and by changing the mathematical expression itself using evolutionary computation. 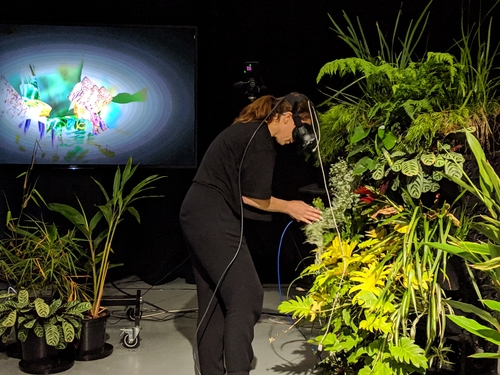 Artists Statement: When we feel and sense through machines, are we still ourselves? In a mixed reality where embodied actions and blinding visions are part woman/part machine, the tactile surface of plants is a portal that conjures augmented materialities into existence. 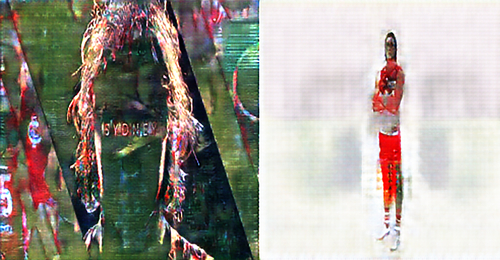 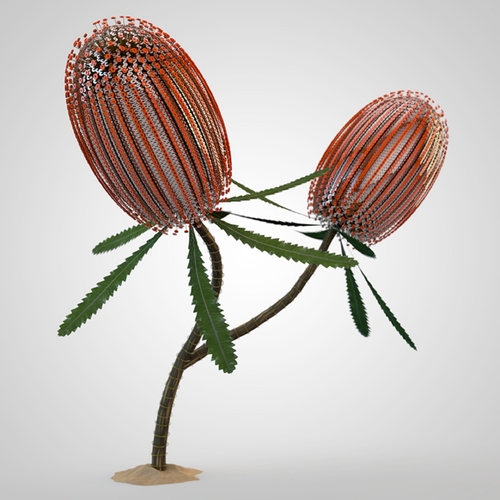 Artists Statement: Fifty Sisters is comprised of fifty computer synthesised plant-forms, algorithmically “grown” from computer code using artificial evolution and generative grammars. Each plant-like form is derived from the primitive graphic elements of oil company logos. The title of the work refers to the original “Seven Sisters” – a cartel of seven oil companies that dominated the global petrochemical industry and Middle East oil production from the mid-1940s until the oil crisis of the 1970s. Oil has shaped our civilisation and driven its unprecedented growth over the last century. We have been seduced by oil and its bi-products as they are now used across almost every aspect of human endeavour, providing fuels, fertilisers, feedstocks, plastics, medicines and more. But oil has also changed the environment, evident from the petrochemical haze that hangs over many a modern metropolis, the environmental damage of major oil spills, and the looming spectre of the global climate crisis. With worldwide demand for oil now at 93 million barrels per day, humanity’s appetite for oil is unrelenting. Oil companies regularly report many of the all-time largest annual earnings in corporate history. This 3-screen triptych of the work presents each form sequentially as a slow, evolving mediation on nature, technology and human consumption. 3 x 4k synchronised video displays, stereo speakers, 30mins 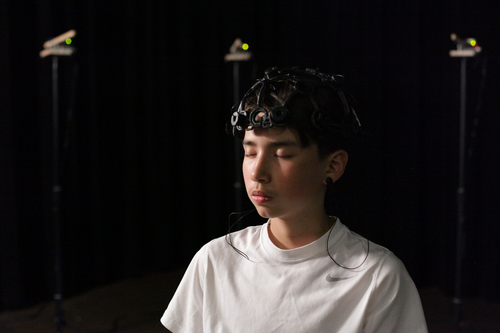 Illusion: you can hear, but you can't see.

Artists Statement: ILLUSION explores the relationship between the body, mind, and machine by taking advantage of the brain-computer interface. It detects whether your consciousness has visual stimuli to produces cadenced sound, an exterior manifestation of the performer’s internal state. When you close your eyes, you can see the world imaged by sounds. 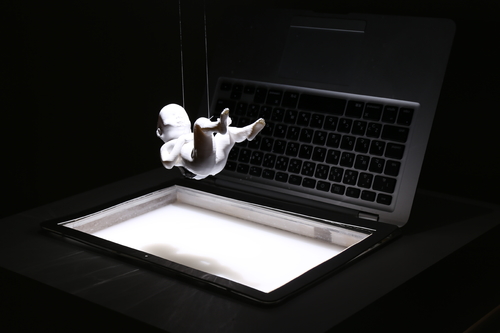 Artists Statement: This artwork is an installation that expresses the future in which users can manufacture designer's babies themselves. You can design, customize and manufacture your baby with your favorite gene on your laptop. A 3D printed child appears from the display, and the child's face created based on the visitor's face. 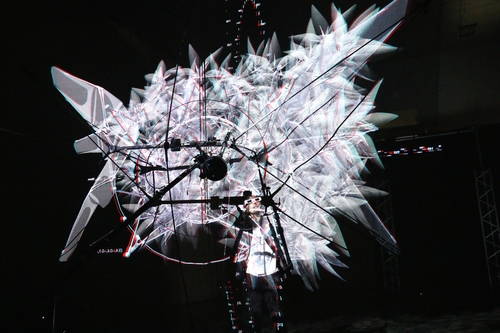 Artists Statement: LightWing II creates a mysterious sensation of tactile data. In this interactive installation, a kinetic construction is augmented with stereoscopic 3D projections and spatial sound. A light touch sets the delicate wing-like structure into a rotational oscillation and enables the visitor to navigate through holographic spaces and responsive narratives. 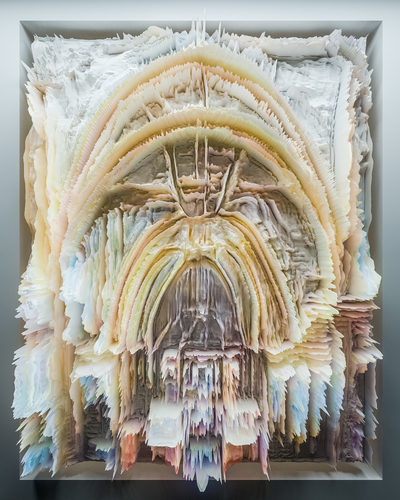 Artists Statement: Machine Hallucinations - Latent Study II is part of an ongoing synthetic reality collection that explores the relationship between memory and dreams, recognition and perception. 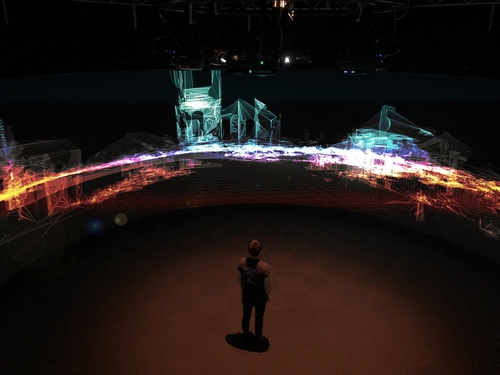 Artists Statement: Metascape: Villers Bretonneux is an immersive, interactive memoryscape experienced in first-person perspective, that simulates 72 hours in real time of the 1918 First World War Second Battle of Villers Bretonneux. The work relies on multiple forms of spatial and memory reconstruction, both driven by algorithmic processes. 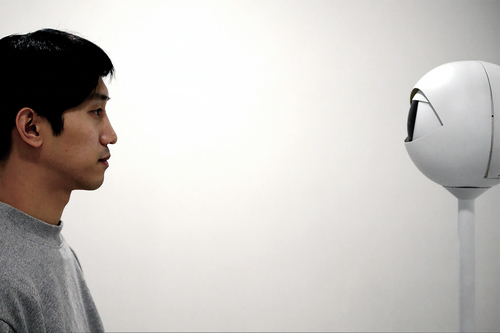 Artists Statement: Numb, shaped as an exaggerated eyeball, follows you and reflects the blinks of yours. It makes you become aware of your own blinking and sensitive to your own sensation. Numb illustrates how we build relationship with technology through senses, and how we become sensitive to ourselves by and with technology. 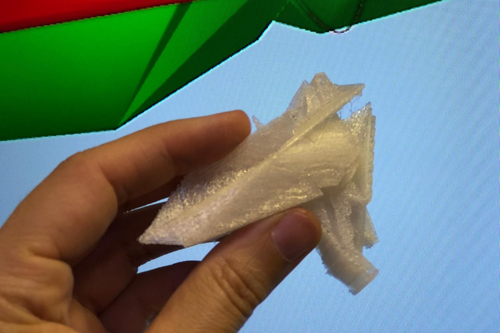 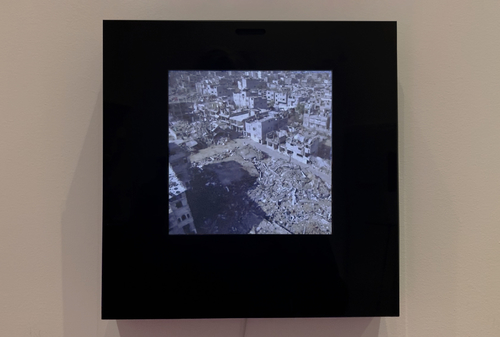 Artists Statement: Smile is a mixed-media installation consisting of a screen in a black box, mounted on the wall. When an interactor smiles, drone-footage of the ruins of Gaza fades in. If the interactor stops smiling, the video stops. It only plays when the interactor widely smiles at it. 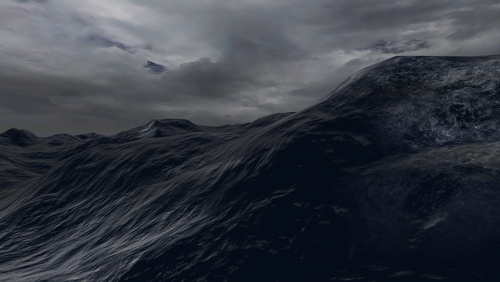 Artists Statement: "SoS" recreates the experiences of two Syrian asylum seekers as they lose sight of each other during a treacherous ocean voyage from Indonesia to Northern Australia. 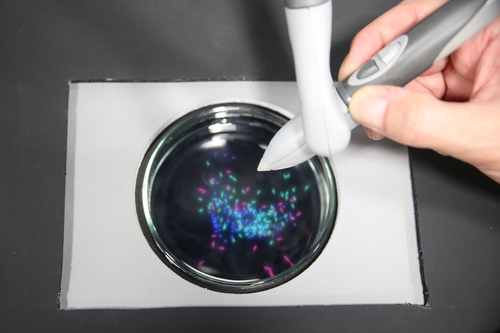 Artists Statement: Tactile Microcosm of ALife offers interaction with artificial organisms, whereby the user can enjoy playing with fish-like organisms through aerial imaging and haptic feedback. The holographic organisms float in water in a petri dish, and the user can feel a forcefield of the vital of the organisms via force feedback.